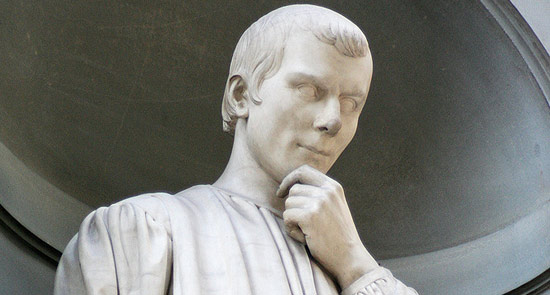 “There is no avoiding war; it can only be postponed to the advantage of others.” – Niccolo Machiavelli

Welcome to part 5 in my series of Machiavellian maxims, as with the previous entries, contained within’s a pithy collection of Machiavellian wisdom. If you’ve not read this series before, or simply wish to reread some of the older maxims, here’s a convenient bullet list for you:

In Fifty Shades of Red (Part 4), I stated it was my intent to compile another series of Machiavellian Maxims. These maxim articles tend to be quite well received (I suppose you all enjoy the break from enduring the intricacy of my essays) – so here they are. Enjoy.

1. – Cull the fickle, insolent, and disloyal, for even if it injures you in the short-term, it will benefit you in the long.

2. – Being likeable is a conflict avoidance strategy.

3. – When dealing with pedants, jobsworths and fault finders, use subjunctives such as “if”, “perhaps” and “maybe”, so they can’t nail you down to a position. Anything that can be misconstrued, will be, plausible deniability is thus paramount.

5. – When people don’t like you, they look for flaws in your methods in an attempt to discredit you. Give them something non life-threatening to chew on.

8. – Projection: most people posit the opinion they hold of themselves as a notable exception for generality in counterargument.

9. – When you describe a man to himself in accurate yet unflattering detail, you deal a crippling blow to his psyche.

10. – The waiting game is a necessary game, as such, it is strategically optimal to outwait those who would test your patience.

11. – If power is defined as one’s ability to impose their will onto the world, then money is the commodification of power in physical form.

13. – Misdirection: if they say a lot of words without communicating a bottom line, they’re deceiving you.

14. – War is everything. All the time, everywhere, war rages constantly. It has different forms, intensities, and appearances, but it persists perpetually, eternally.

15. – Competition is not war per se, but rather, its predicate. One can compete indirectly and without maliciousness of intent. War on the other hand is wilful violation, for it is less distant, more immediate, and manifests itself as conflict or sabotage.

16. – Frames are a war of propaganda. Do not absorb the other side’s frame, have them absorb yours. Whoever absorbs first, loses. If neither side concedes, stalemate. Caveat: satire.

17. – Intelligent energy allocation is a fundamental principle of effective strategy, for bereft energy, there is nothing.

18. – Pragmatism is king, doubly so when one is suffering.

19. – Strong ethics are oft the superficial purview of the elite and the substantive limiter of the loser.

20. – The middle class are confined to methodologically unsound moral codes, for it ensures they’re neither a threat nor a factor in the game of power.

21. – The poorest and the richest tend to be the least moral, for the poor have dire need, whereas the rich possess excess power; desperation and domination alike lend themselves to immorality.

24. – The method necessary to win and it’s associated reputation are entirely distinct entities. Method is effectiveness, reputation is perception.

26. – Most are focused on how being bound to their word can limit their freedoms by putting them in a bind, the reversal however is that by speaking truthfully and keeping your word when no one else does, your credibility grows immeasurably. Irrespective of their aesthetic contradictions, both are simultaneously true. These are not mutually exclusive conditions.

27. – If you discover someone’s given you misinformation, ascertain the probability this was done so with ill intent; there’s a good chance you’re at war.

28. – To be successful is, effectively, to paint a bullseye on one’s back; to be famous is to intensify the geometric volume of said bullseye.

29. – Many notable people have acquired demons and skeletons in their pursuit to the top. Enemies instinctively expect this, hence the propensity to dirt dig and smear the noteworthy.

30. – People judge themselves less harshly than they judge you, to them, what is not permissible for you is so for them.

31. – Everyone judges you on your actions, but not everyone understands why you did what you did. Fewer care why.

32. – Bread, circuses and a pseudo-educated population ferment an apathy that makes for easy governance.

33. – Someone is always responsible for failure, but the person truly at fault is not always disposable. This is why the fall man was invented. He who is unuseful will be allocated the blame for the mistakes of he who is.

34. – When people analyse literature and interpret, they believe their deductions to be uniquely theirs, rather than seeds planted by the writer.

36. – Inferiors think you’re equal when you validate their nonsense with a response. Corollary: the higher you ascend, the more proficient one need be at ignoring trite.

37. – When confused, the inverse of the overt statement’s appearance is often where you’ll find truth.

38. – When we see what we want to see instead of what is, we fool ourselves. All the other person need do is study our desires, and present themselves as such. They show us what we want to see, and we are all too happy to ignore anything extraneous. For this reason, it is clear: the person best suited to deceive you – is you.

39. – To expose subversive elements, appear reactive, then don’t react when a shot is fired in the grand confidence you will respond – upstart morale shatterer.

40. – Arguments are more about spin than they are material facts. It is not the best logician that wins, it’s the best spin artist.

41. – Be mindful about revealing how you would intend to react in threatening hypothetical scenarios, for if such a reaction is deemed profitable, you will inadvertently bring about its undesirable cause.

42. – The resentful weak will clutch at any avenue for revenge no matter how trivial and leverage it to its absolute utmost.

43. – Politics is war by psychological means, media but its delivery system.

44. – Typical enemies are visible, they promote you by being vocal in their hatred of you. Insidious enemies invisibly undermine you by recruiting someone to smear you, or by endorsing your visible enemies. The insidious enemy does not market for you, sometimes he even poses as a friend. Be mindful of him, for he is the Trojan horse.

45. – You detect Trojans based on what they don’t do rather than what they do. Even when hidden, enemies are usually close. Apply a probability heuristic to your surroundings to identify potential Trojans.

46. – He who is seen is only more powerful than he who isn’t, when being seen yields profit and being not doesn’t.

47. – Sow seeds of doubt invisibly to create division among others, whilst appearing warm to all involved. This will allow you to consolidate power in the popularity Olympics that constitutes human relations.

48. – Business or war, targeting works the same, you target people with influence over others, not influencees. Destroy a leader, destroy his men. Win a leader, win them.

49. – Everything is a tactic or a play or a move, if you can’t see this, it’s because you’re undiscerning, not because it isn’t there.

51. – Winners don’t play fair, they hide their edge and maintain the illusion of fairness.

52. – The more powerful a person becomes, the more likely they are to distance themselves from previous allies.

53. – Be unpredictable, appear weak when strong, or strong when weak, alternatively, oscillate between the two to be an unpredictable enigma.

If you’re interested in consulting, click here. If you enjoyed these maxims, you will enjoy the following resources.